Hima is Heka’s resident media on life in the best rental apartments in Helsinki. The Hima magazine is delivered to each Heka home four times a year.

Karstulantie 10 is an ideal site for the recovery of waste heat from ventilation. These systems will also be installed in other Heka buildings in the future.

On a clear October morning, the temperature in Helsinki fell below zero for the first time this season. However, the tenants of the Heka building in Karstulantie 10 do not suffer from the cold, as the building is kept warm by the latest energy-efficient technology.

When the building was completed in the 1960s, energy conservation was not yet a burning question. District heating was cheap, and the mechanical ventilation of the building blew away the warm exhaust air from the apartments.

In the 2020s, things are different and energy waste is not tolerated. On Karstulantie, the problem was tackled with an EAHP, i.e. an exhaust air heat pump. The name sounds complicated, but the principle of the device is simple. Pertti Nissilä, the CEO of Smart Heating Oy, which installed the device, opens a door revealing a shiny new heat pump and two water heaters. Now the heat of the exhaust air in the building is transferred to the liquid circulating through the heat recovery unit in the attic. From there, the warm liquid flows to the downstairs heat pump, which recovers the heat and raises the temperature to be appropriate for the building’s heating system.

‘All the heat is recovered,’ Pertti Nissilä assures us and shows the real-time readings on his mobile phone. Before, the temperature of the indoor air blown into the sky would have been over 20 degrees. Now, after passing through the heat recovery unit, the exhaust air temperature has dropped to 2.2 degrees, which is a little cooler than the outside air.

Heka has set strict climate goals for itself. Housing is a major source of emissions in Finland, and the Carbon-neutral Helsinki 2035 programme intends to reduce emissions in the Helsinki metropolitan area to a fraction of what they used to be. EAHP systems are one way to improve the energy efficiency of old apartments.

On Karstulantie, there is a clear improvement from before. Heat recovery, started less than a year ago, has generated a 40 per cent saving in the buildings heating expenses. The emission reduction is even greater. Heating emissions are 56 per cent lower than before.

‘Karstulantie 10 is an ideal site for such a system,’ says Karri Åhs, property manager at Heka.

In a tall, single-stairwell building, the heat of the exhaust air is easy to recover. The next good installation sites are currently being sought among other Heka buildings.

Heka Property Director Vesa Jurmu says that Heka’s goal this year is to cut the district heating consumption of the entire housing stock by 1.5 per cent. If the building was not originally built with a heat recovery system, an EAHP is a good way to make use of the heat that would otherwise go to waste.
‘The goal is to install three new systems in our buildings every year,’ Jurmu says. 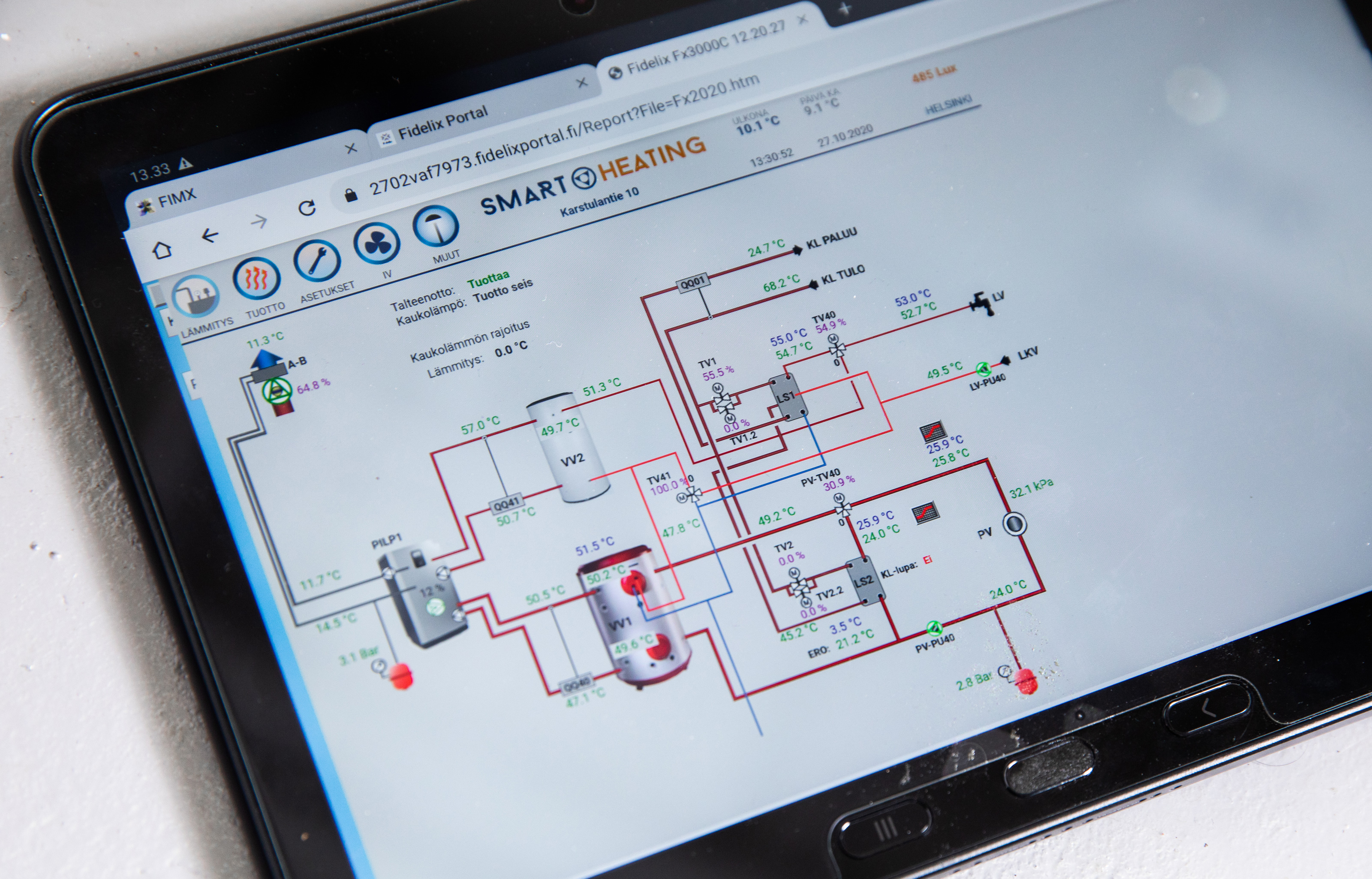 The system on Karstulantie even has some high-tech features. An example mentioned by Pertti Nissilä is the fact that the equipment includes two different kinds of water heaters. Using superheating technology, the heat pump produces hot water for one of the heaters and slightly cooler water for the other for the radiator network. This contributes to improving the efficiency of the system.

‘The system is also monitored remotely. Before, any problems with the heating system were not detected until the building had cooled down, and now we detect them in advance. The problems can also often be solved remotely,’ Pertti Nissilä says.